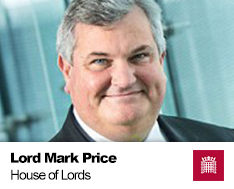 Mark Ian Price, Baron Price CVO (born 2 March 1961) is a British businessman, Founder of WorkL for Business and WorkL, Chairman of Fair Trade UK, writer, President of the Chartered Management Institute and member of the House of Lords. He was a former Managing Director of Waitrose, and Deputy Chairman of the John Lewis Partnership.[1][2][3][4][5] He joined the Conservative government as the Minister of State for Trade and Investment in April 2016.[6]

On 3 September 2017 it was announced that Price would leave the government; on 28 September Rona Fairhead was appointed to succeed him.[7][8]