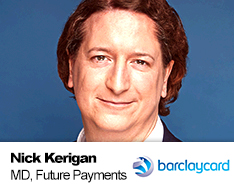 In this role, he is responsible for driving innovation globally across Barclaycard International, creating customer and commercial opportunities from the rapid changes in payments. His team is responsible for designing and developing exciting new innovations such as the award winning grab+go.

Nick has been with Barclaycard since 2011 and with Barclays since 2006, in various digital, market intelligence and strategy roles including Head of Strategy for Retail and Business Banking.

Prior to that, Nick was Principal Banker in private equity at the European Bank for Reconstruction and Development (EBRD), where his role included restructuring financial institutions in Central and Eastern Europe.

Earlier in his career, Nick worked for the Financial Services Authority supervising banks.